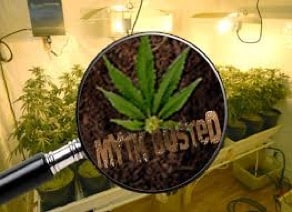 To bust the 5 most common cannabis myths, you have to understand the history of cannabis and more importantly, the history of marijuana prohibition. Cannabis has been used by humans for over 10,000 years. But in the scheme of things, the negative stigma surrounding it has only been a recent phenomenon. Cannabis was first made illegal in California in 1913 and then made illegal federally when the Marihuana Tax Act of 1937 passed. Lawmakers originally claimed it caused users to be violent, and made them want to kill each other (Kill? Violent? Can you imagine Cheech and Chong attacking one another with their bongs?). The law was later revised again, saying marijuana made users passive and carefree about their work/life. If that is not a huge contradiction, I don’t know what is!

Sadly, not much has changed from the latter viewpoint. We’ve all heard the derogatory terms: pothead, stoner, blazer which immediately bring up images of long-haired teenagers lighting up a bong, sitting in a cloud of smoke, giggling at nothing and everything with munchies at arm’s reach. However, the more we learn about the benefits of cannabis, the many myths that paved way for this stigma taking hold are being busted. Let’s look at the 5 most common cannabis myths.

According to a 1999 study conducted by the Federal Institute of Medicine, less than 10 percent of those who try marijuana ever meet the clinical criteria for dependence, while 32 percent of tobacco users and 15 percent of alcohol users do. Now that’s not to say people don’t use marijuana to escape their problems, but one could argue no more so than people use working out, a cold beer at the end of a work shift, or reading a book. I personally am dependent on my books for an escape from my daily stresses. That escape actually helps me to cope with those stresses once I’ve had a break from them. It’s up to us as responsible adults to balance our escapes – which I have to remind my husband when he works out a bit too much. As Aristotle said, “Moderation in all things.”

It seems like everything causes cancer these days, some more than others. But is cannabis on that ever-growing list of cancer-causers, or can it actually do the opposite? The website, Drugpolicy.org states, “Several longitudinal studies have established that even long-term marijuana smoking is not associated with elevated cancer risk.” The article goes on to say, “a 2009 population-based case-control study found that moderate marijuana smoking over a 20-year period was associated with reduced risk of head and neck cancer. A five-year-long population-based case-control study found even long-term heavy marijuana smoking was not associated with lung cancer or upper aerodigestive tract cancers.”

Whether it be from cigarettes, a campfire, or any other form, smoke is not good for the lungs. Which is why edibles, such as MED-a-mints, are a great choice! They have all the benefits cannabis has to offer, without inhaling the smoke our lungs protest.

Cannabis Myths: #3 – Legalizing marijuana will lead to increased use in youth

This was one of the many concerns with the legalization of marijuana in states such as Colorado and Washington. However, the results are in and you may be surprised. According to the Drug Policy Alliance, “Several recent reports have found that, in the majority of medical marijuana states, youth use decreased after the medical marijuana law was passed. This has been attributed to a diminishing of the “forbidden fruit” effect, and decreased access as marijuana moved from the streets to inside licensed dispensaries.” The studies don’t just stop with the youth. Another study conducted by the Federal Institute of Medicine concluded, “In sum, there is little evidence that decriminalization of marijuana use necessarily leads to a substantial increase in marijuana use.”

Cannabis Myths: #4 – Marijuana users are a menace to society 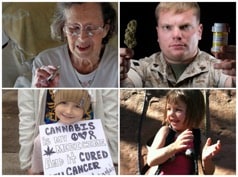 A chart produced by procon.org was put together with data from Department of Public Health surveys in the states where Marijuana is legal for medical use. The chart proclaims that 2,604,079 people use medical marijuana for various different ailments. California Proposition 215, which passed in 1996, states the conditions medical marijuana can be used for are: “cancer, anorexia, AIDS, chronic pain, spasticity, glaucoma, arthritis, migraine, or any other illness for which marijuana provides relief. Physicians have recommended marijuana for hundreds of indications, including such common complaints as insomnia, PMS, post-traumatic stress, depression, and substance abuse.” These are everyday people that we know, who suffer from ailments. Friends, neighbors, associates, and even family members from all walks of life have found relief from their suffering through medical marijuana.

There is quite a bit of debate these days about whether or not marijuana is a gateway drug. The gateway theory argues that because heroin, cocaine, and methamphetamine users often used marijuana before graduating to harder drugs, therefore it must be a “gateway” to harder drug use. However, since 49% of Americans have used marijuana in their lifetime (as stated above), the gateway theory doesn’t hold up. That would mean 49% of Americans graduate to harder drugs, which the facts prove isn’t true.  On the contrary, more evidence shows that cannabis is actually helping some people to get off the harder drugs. There is a study, that shows in states where medical cannabis is legalized there is a 24.8% lower mean annual opioid overdose mortality rate.

An article by the Boston Herald explains how Dr. Gary Witman (of Canna Care Docs, a network of facilities that qualifies patients into medical marijuana programs in Rhode Island, Massachusetts, Maine, Connecticut, Delaware and the District of Columbia) has treated about 80 patients who were addicted to opioids, anti-anxiety medication, or muscle relaxers with cannabis through a one-month tapering program. More than three-quarters of patients stopped taking the harder drugs. Dr. Whitman says, “As soon as we can get people off opioids to a nonaddicting substance – and medicinal marijuana is nonaddicting – I think it would dramatically impact the amount of opioid deaths.” So it looks like marijuana is a gateway – a gateway out of hard drugs.

One thing is clear about cannabis myths. The more information that comes from cannabis studies and personal use stories, the more we are seeing a shift in the negative stigma that has surrounded marijuana for so many years.